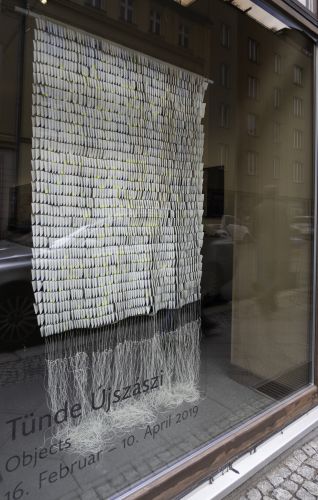 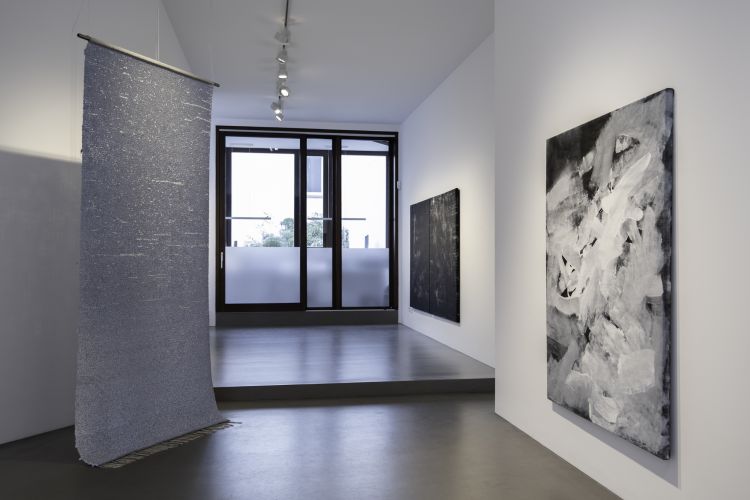 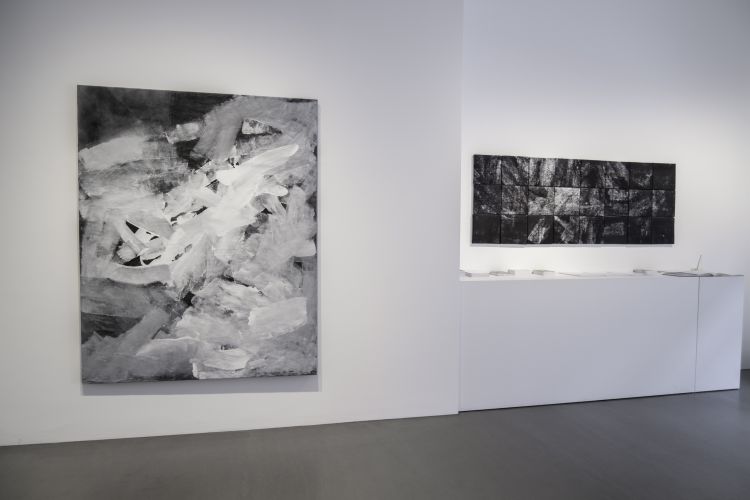 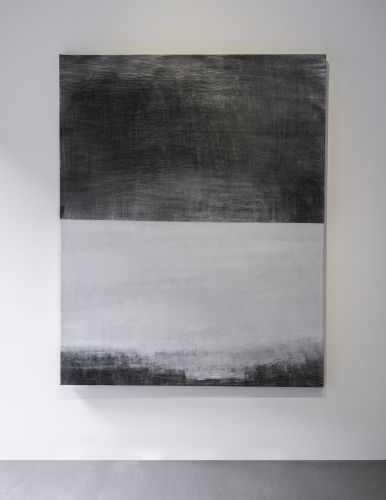 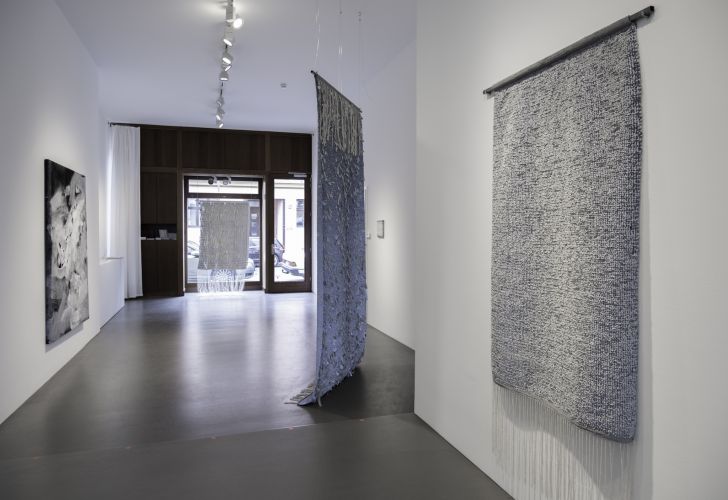 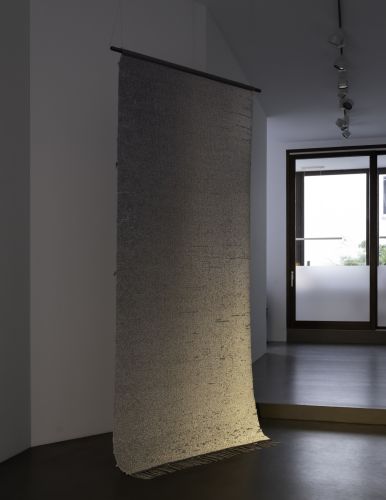 It is an honor to be here, and also cause for a little pride: You should know, that Tünde studied at a university — Moholy-Nagy University of Art and Design — where I was and still am teaching philosophy of art and art history; in fact, Tünde did study with me in a few courses, and I was present when she participated in an inter-university academic competition, and was also the theory consultant in her thesis work. It would be very fulfilling to say, that I already knew, back then, where she was heading, what kind of artist she was going to be — but that is not the case. Honestly, I had no idea and therefore my pride should be kept at bay. And so I’d rather express my awe.

Expressing awe is not an objective attitude, so please forgive me, if at this point I am not going to speak as a proper historian or critic of art, but rather as a one-time teacher and a friend.

When I was thinking how to introduce this exhibition, it occurred to me that perhaps I tell you three expressions that best describe Tünde as an artist. So I will propose three expressions, and then another three, relating to the first ones, and finally, wrapping it all up, a last one. Seven, it will be, altogether. And I’m going to explain all of them briefly, in due course.

And relating to these, explaining or deepening:

And finally, connecting these:

(1)
I use the term Modernism in the artistic sense (and not in a social or technological or, for that matter, everyday sense). Artistic modernism can be approached from very different directions; today I’d like to offer Clement Greenberg’s definition, who stated in his 1960 essay, Modernist Painting, that “The essence of Modernism lies (...) in the use of characteristic methods of a discipline to criticize the discipline itself, not in order to subvert it but in order to entrench it more firmly in its area of competence.”

The textile department, where Tünde was studying, encouraged experimenting to a point, because experimentation is indispensable for a creative designer. And while experimentation cannot do without reflection, without having a critical stance toward the results, the products, it is not the type of critical attitude artistic modernism thrives on.

Artistic modernism has to be critical about the forms, the methods, the technologies that are used. It needs to rethink the accepted and to question the status quo. So besides reflecting on the question “Why this way?” It has to ask, “Why at all?” and “Why creating pattern?”, “Why producing new materials?”

And digging even deeper: “Why doing textile?” “Why creating art?”

But questioning is not enough. A modernist work has to have answers to these questions, woven into its very texture. Not only in statements concerning the work, but it should be present in its fabric, in its choice of material, of form, of color, of technique. That is actually what makes a modern — and especially a non-figurative — work a work of art and not a decorative object.

Most of you are probably aware of the fact that Hungary was a communist dictatorship between 1949 and 1989. Repression was not of the same degree throughout these decades, but censorship was always present up until the late eighties, and was especially strong in the early seventies, after the liberalizing tendencies of the late sixties. Modernist or — as it was called then — neoavantgarde art was heavily censored and pushed under ground. There was only one medium that fared better: textile. Censors probably thought that it was only decorative design, lacking meaning, and also, being a feminine art form, why should the regime be afraid of it?

The New Textile movement of the 1970s, whose activities centered around a residency in Velem, a small village in the country’s western region, asked precisely these modernist questions: Why textile? How can we use it in art differently? What happens if it is installed as art? And what if the installation is outdoors?

New Textile was studying contemporary fine art closely: minimalism, conceptual art and the like. And was trying to go beyond the intellectual and artistic space it had earlier been granted.

New Textile as a movement ceased to exist in the late seventies, so when Tünde started studying at MOME, it was a closed story, an episode in the history of Hungarian art. Most of its participants were either retired or busy doing industrial work, or creating beautiful textures. Tünde, however, was lucky enough to have met a designer/artist, Lívia Pápai, who introduced her to a number of influential artistic theories, most prominently, among them, Malevitch’s program in the The World as Objectlessness. Through this she helped Tünde ask the modernist, critical questions concerning textile practice — this was the time when she started using paper (folded and painted black) in her work —, and more importantly she helped Tünde acquire, or perhaps work out a modernist stance towards art.

(2)
The second expression I’d like to offer is surrender. Now surrender may not seem a self-evident term in the context of art. An army may surrender in a war against the overwhelming force of its enemy. Or a village, a town, a country surrenders to avoid total destruction, and save at least the lives of its inhabitants. Or a criminal after being cross examined. Or, for that matter, Jesus Christ surrendered and gave himself up to the will of God.

In this present context I’m borrowing the term from Brian Eno. Eno is the father of ambient music, and his ideas concerning the birth of ambient and of surrender are relevant here.

In an interview, Eno recounted how — after playing in Roxy Music and publishing two or three LPs of his own — he became dissatisfied with the rock song format and gradually started taking out elements that had been considered essential up until that point. He took out the words, then alteration of theme and chorus, then melody, so finally the classical song structure — with its beginning, main part and end; with its direction — disappeared. What remained were sounds, whose texture had to be experienced; and this experience needed immersion on the part of the listener.

Eno went one step further, and decided that even the sounds, their length, their height, their tone, their instrument, and their order should not be based upon his decision, and so he started experimenting with, what he called, generative music. Sounds are generated on the basis of a few initial principles — so even the producer could immerse himself in these textures, which were unknown even to him.

Now chance has a prominent place in the history of 20th century art. Think of Marcel Duchamp’s Large Glass, and how it became finished after having been ruptured in 1923. Or of Man Ray’s Dust Breeding (1920), Tristan Tzara’s suggestion on how to write a poem. Recall the surrealist definition of beauty (quoted from Count Lautréamont’s Chants of Maldoror): “Beautiful as the chance meeting on a dissecting table of a sewing machine and an umbrella”. Think about John Cage’s music or the gesture painting in the fifties. Think about unscripted happenings. Or environmental works that are exposed to the weather and to time. Ephemeral pieces in various states of decay. And I could go on.

Clearly, many twentieth century artists have been trying to go beyond their egos by evoking chance in the creative process. By surrendering to forces outside. By letting it go.

Earlier I was pointing out Tünde’s relation to the Hungarian New Textile movement of the seventies. And while weaving — which many of them did, in some ways — cannot be but generative, and while some of them was experimenting with environmental works destined to decay in open air, the artists were always in control. They were modern artists.

If I’m not mistaken, Tünde is unifying both traditions: she is asking modernist questions but abandoning the modernist artistic ego. She is letting it go.

(3)
But — and with this I come to my third term, perseverance — letting it go, letting things happen is not the same as being lazy. Giving up control should not be mistaken for giving up thinking, or being critical to one’s ways and means and materials of creation.

On the contrary, it is being alert, constantly on the watch-out.

Over the years of instructing dissertations, following artists as an art critic, or being an author myself, I have come to the conclusion that it is not so much talent that great accomplishment needs. It is good to have some, but not enough by far. Many would say, especially at school, that it is diligence that one needs to make things happen. True. But still not enough. Why being diligent — one can always ask —, why not go to the movies, or do something more interesting? Or satisfying? Or beneficial? And the truth is that diligence is not, and cannot be an answer in itself.

So I have come to recognize perseverance as the single most important character trait in long range accomplishments. Having stamina to do what you have set out to do, in the face of self-doubt, lack of recognition and other destructive factors, or simply in the face of time’s passing, is the single most important personal quality that great work needs.

Giving time its due, remaining empty-handed for months, even years — if that is what it takes to reach one’s goal — well, that’s tough.

Ibolya Hegyi, one of the greatest practitioners and theoreticians of the art of tapestry, called her medium: web of time. It takes very long time, she wrote, months or years, to weave a carpet, with long and lonely hours: doing, thinking, meditating, doing, thinking... This thinking, this time is preserved by the work, it is woven into its very fabric. Web of time — that is the work.

I do believe this idea can be generalized without losing its force. Important work is almost always woven time, of stamina, of perseverance.

Tünde’s work is the best example of that — both her woven pieces, literally, and her painted works, more metaphorically. She has always had strength to do things as long as they needed to be done; or wait, as long as it takes, to do something meaningful.

And this brings me to my last term, the seventh, that will help me connect the dots. How is it, we may ask, that a person never seems to lose direction? What does it take to stay on course?

I believe, it is taste, that helps us stay on good course. It is our taste — more than anything else: reason or love — that guides us in our choices, personal, communal and in this case, artistic.

Taste is needed to decide if a long awaited work does have the necessary qualities to be shown to others, to be included in the portfolio. Taste is needed to decide whom to show together with, where to show and when to show. Taste is a faculty that can — somehow — compute the various and diverse factors an artist (or any person, for that matter) experiences, thinks, being told concerning a given problem, and bring out the simple answer: “Yes, I like it”; or “No, I do not want anything to do with it”.

Modernism, textile, surrender, chance, perseverance, time, and these objects surrounding us, are all consequences of decisions Tünde had to make in the last couple of years. She made these decisions in good taste.

And thus, besides expressing a deep liking for these works, I’m also expressing an awe for Tünde as an artist.