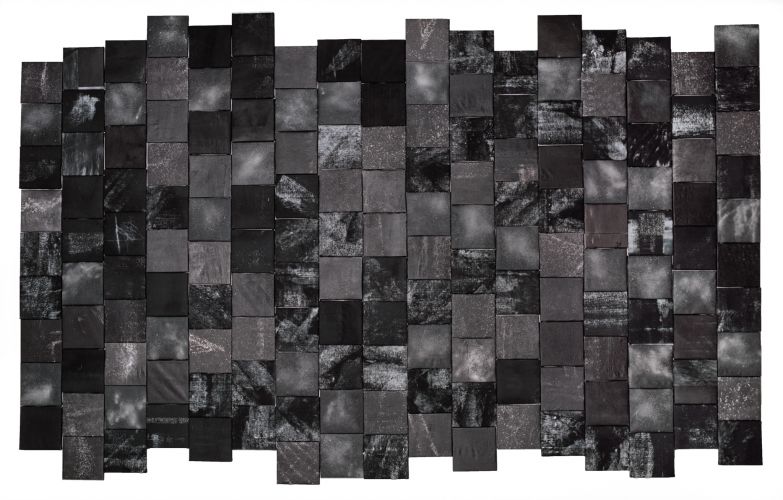 Black and white. The exhibited artworks of Tünde and Ákos inspire the art historian to speak with simple sentences and not to speak for too long. However, there is something that we need. While I was looking at their works and contemplating the appropriate tone of language for this opening, I remembered the Tractatus Logico-Philosophicus by Ludwig Wittgenstein, which consists of such sentences: “The existence and non-existence of the chair is the reality.”

So the following speech is going to be a collection of associations based on such simple sentences. It is not going to form a coherent monologue that intends to get from one place to another. Such journeys, getting from A to B, departing someplace and arriving to another, are somehow illusions anyway, constructing development, innovation and other forms defined by reason. Let's begin then, and hope that Wittgenstein will not turn in his grave.

This exhibition is titled Essenceless. This would basically mean that the work of many months — especially if carried out by artists who typically make a fetish of their own creations — is unimportant, which is rather uncommon. Why is it essenceless? What is essenceless?

According to the interpretation by Tünde and Ákos, the form itself is essenceless, and therefore unimportant. The visible, the portrayed and the comprehensible itself is essenceless. Artworks beyond the world of form. Although we could assume that there is no greater commonplace I could say about an exhibition of abstract works. However, maybe what is displayed in these images is not very abstract; it very much concretely depicts what is beyond the form.

Ákos represents the photograph and the object that is photographed (let's chew over this word: “photo” and “graph”), in this case the football goal or the drying rack, in a manner that disassembled the image itself into pixels, and leaves nothing else but the visual noise to remain as the unit, that is a piece of the visible surface. The objects seen (or not seen) here are actually documents, photos taken in the dark using low-quality digital cameras about objects such as a football goal or a drying rack. So the particles and remains of these visual experiences are printed on the canvas, and these particles are not different from any other particles we experience, that appear in our world. Therefore it is absolutely unimportant what the football goal or the drying rack are, since they are the same as any other visible information, a vibration or particle that is represented in our experience in different constellations, manifested as objects, persons, feelings, ideas.

While Ákos deconstructs, Tünde constructs and she breaks white through the black surface “fighting the material”, and attacks large canvases with black in a gesture-like manner. She creates black surfaces with abstract expressionist painting energies, which are actually black spaces with different depths, in some cases allowing the appearance of a little whiteness. The canvases call the viewer closer and closer, and we almost feel sorry that the images have an edge and do not cover the entire exhibition space, in order to allow our entry into this emptiness. The images do not depict or represent, they stand as tools on this route beyond forms.

The world beyond forms hides behind language. The very last sentence of Tractatus Logico-Philosophicus by Ludwig Wittgenstein states: “Whereof one cannot speak, thereof one must be silent.”

So language beyond forms does not consist of words. Only poetry may be suitable to explore this topic. However, I am no poet. So I give back to arts what belongs to arts, and rather remain silent.